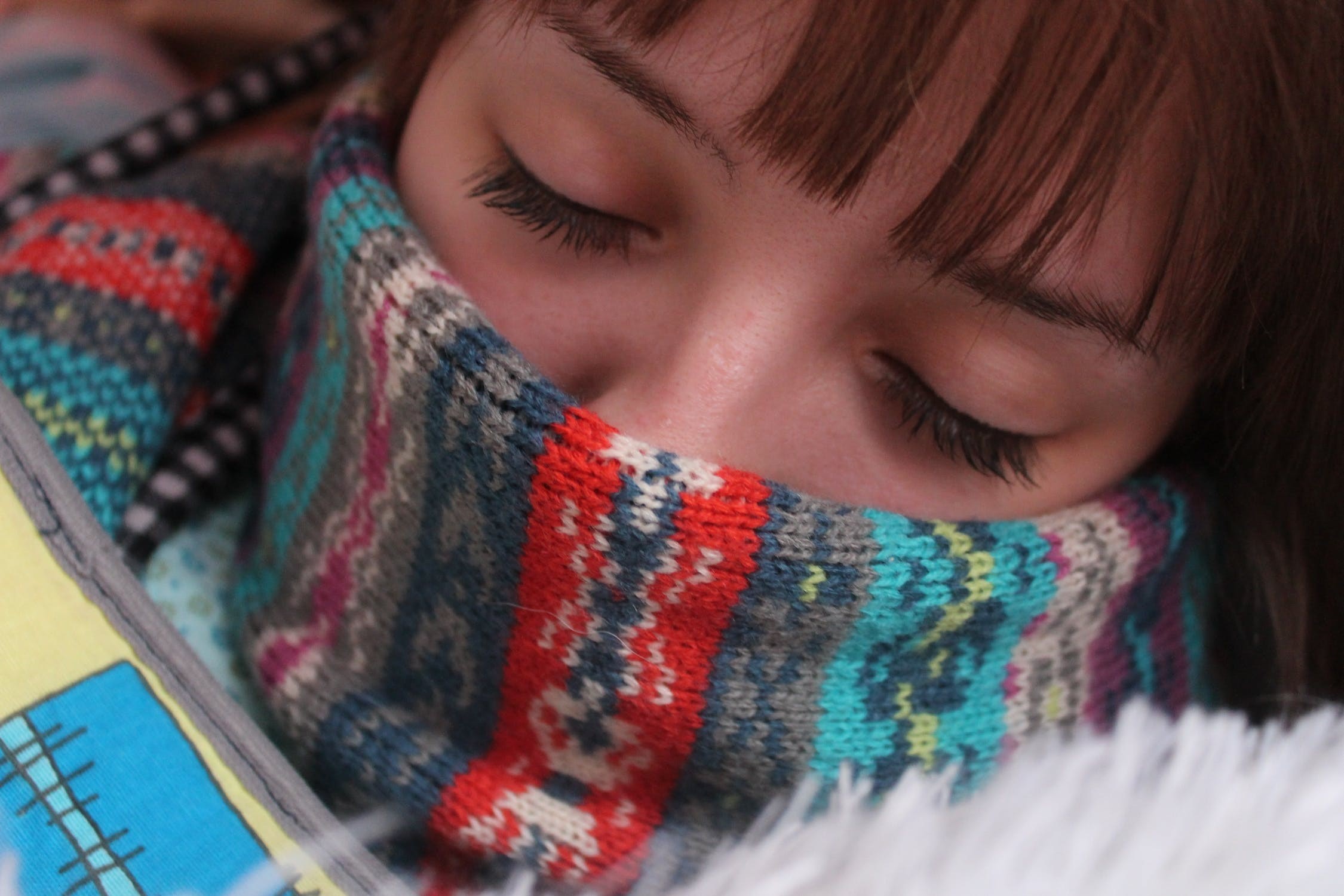 Summary:  Dr Chan Kam Ping was on the front line with the SARS virus in Hongkong and south Asia, published by The British Medical Journal (BMJ). Among other findings (presented at the bottom of this article, he observes that SARS victims “usually stay in a cold environment for a reasonable time after being infected, eg. in medical ward, hotel, aeroplane cabins, air-conditioned offices.” He recommends that we: ”1. Put on more clothes to make body really warm, 2. maintain room temperature at least above 23C, and 3. do exercise for 30 minutes daily, make sure you really sweat.” (1)

I feel Dr Chan’s medical observations and conclusions are of profound importance, first because of the similarity between COV19 and SARS and second, because the guidance from the CDC and WHO has been focused almost entirely on how to avoid contracting COV19, but not how to strengthen and prepare our bodies to win the battle. Dr Chan’s findings empower us, as individuals to help protect ourselves and our loved ones.

When you strengthen your overall lung health and immune response, if you do catch this flu you are likely to have fewer symptoms for a shorter period of time. This not only reduces the load on hospitals and reduces death rate, but it also reduces how contagious you are and for how long you are contagious. I say this because healthy individuals are reported to recover more quickly and have less severe symptoms.

The CDC, WHO, and the media have focused on reduced contact but it appears that social distancing and quarantining is not enough. The COV19 appears to be spreading as easily as other viruses, so every one of us may be exposed to it in some form within the next few years. This means we need to be proactive about our own health and not depending on waiting until we’re sure we are seriously ill, then going to the doctor to get tested.  Being proactive has other benefits. We will have more vitality and mental clarity, will feel less overload, and will enjoy all of life more. This means we need to pursue ways to build our vitality and immunity.

Dr. Chan observed that wearing more clothing and staying away from cold public places during flu season can strengthen the human body against the SARS flu. This probably applies to COV19, a similar coronavirus. Before Florence Nightingale introduced hand washing to nurses, doctors viewed hand washing as unimportant. The medical presumption that core temperature is the only important variable to monitor in a patient may be a critical medical blind spot which is needlessly increasing the risk to flu patients.

Let’s see if Dr. Chan’s observation that SARS did not penetrate hot, humid countries applies to COV19:  India, with 17.7% of the world’s population has less than 0.1% of the world’s cases of COV19. Many experts claim that India is largely safe from COV19, because of its hot, humid weather. This could be exactly the reason why Ebola, yellow fever, SARS and MERS which caused many deaths had negligible impact on India.

**Here’s a note from the American Lung Association:  “Cold weather, and particularly cold air, can play havoc with your lungs and health. With much of the U.S. currently facing frigid temps, be sure to follow these tips and tools to help you through the winter weather without putting your lungs at risk. Cold air is often dry air, and for many, especially those with chronic lung disease, that can spell trouble. Dry air can irritate the airways of people with asthma, COPD or bronchitis.  “It now seems that grandma was right after all, getting a chill can predispose a person to respiratory infection including pneumonia,” says American Lung Association Senior Scientific Advisor Norman H. Edelman, M.D. “As she would have recommended, dress warmly, keep your feet dry and your head covered.”   https://www.lung.org/about-us/media/top-stories/cold-weather-your-lungs.html

A study from Yale University published December 2015 in the journal Proceedings of the National Academy of Sciences found that the common cold thrives in our noses when it’s colder. This is due, partially, to the fact that our antiviral immune response is diminished when the nose’s temperature is colder than our core temperature.

The medical assumption that core temperature = body temperature, while a useful simplification often blinds doctors to even considering that a cold nose simply allows a virus to multiply, whereas a warm nose fights it off.  It’s not just the sinuses that can be colder than the core temperature.

Clearly, even though the core temperature remains constant, the temperature of the body varies between a little above room temperature and core temperature. This means that all these parts of the body can be places where accelerated viral reproduction is possible. Specifically the lungs are not the core. Their temperature is strongly influenced by the temperature and humidity of the outside air. Further, when the arms and legs have inadequate clothing, the body first cuts blood flow to the extremities, then cuts blood flow to the second most important point of heat loss, the lungs. Putting on an extra sweater or a blanket causes the extremities to stay warm and causes the body to increase temperature and blood flow to the lungs. This means that a blanket can make the difference between a successful immune response in the lungs and pneumonia. Remember. The Duke study shows that a decrease in temperature of just a few degrees can cause a rapidly spreading infection. Dr Chen was right. Adding blankets and clothing and maintaining warmer room temperature really does reduce the rate of growth of virus.

Monitoring peripheral temperature of all patients with a quick touch of an arm or leg, then and adding a blanket as needed is a fast and easy fix in hospitals. It may make a huge difference in rate of survival in the cases of COV19.

As you can see from the data below, Dr Chan is being proven entirely correct. Young people with higher metabolic rate survived much more easily.  Those under 50 years of age who tested positive for the COV19 had 0.3% or less. Those who work indoors had 0.4%. However, those who worked outdoors, farmers and laborers, had higher rate of 1.0%, even though we would think they had a healthier job with greater social distancing. Apparently, exposure to cold weather is a much more important factor. As is already known, those over 80 years of age with the lowest metabolic rate who were tested positive for the virus had an 11% rate.

The conclusion is clear. Bundle up.  Keep warmer than normal. If you work outdoors, wear an extra layer.  If you are elderly and need to go to the hospital or doctor’s office, bring your own extra blankets to avoid being victim to cold, air conditioned waiting, examination, and patient rooms.

There’s one more factor here. The calculated mortality rate only applies if your symptoms were already so bad that you were later tested. You can see two numbers here.  The media has been throwing around mortality numbers for the COV19 based on confirmed cases. As you can see here, this same calculation would show that the seasonal flu would have a very fearsome 10% death rate so far this year. 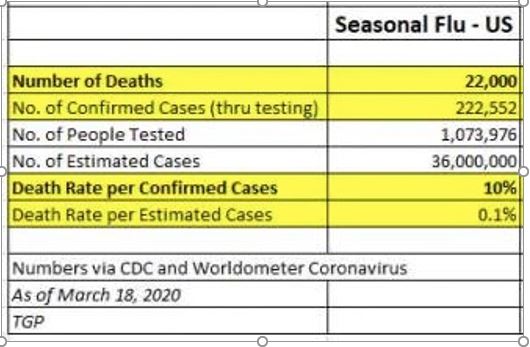 Fortunately, when the estimated total number of unconfirmed cases is factored in, the mortality of seasonal flu is 100 times lower, or 0.1%. This means that, when the correct calculation is done with actual number of cases the COV19 will be shown to be much less dangerous for the individual than previously thought. However, this also means that there are vastly more minor cases of COV19 than confirmed cases. This means that social distancing is vastly more important for postponing the spread of COV19 until spring and summer to reduce the number of elderly people who are exposed to it during cold winter months.

This also means that it is even more important for everyone to dress more warmly and add an extra blanket, especially if you have minor sniffles or cough.  This will assure you recover more quickly and spread whatever version of cold or flu you caught to fewer people.

At the height of the SARS outbreak in 2003, Dr Chan Kam Ping a medical practitioner in Hong Kong reported about the role of peripheral temperature in controlling SARS, a coronavirus similar to COV19: Click here for Dr. Chan’s full Report

Please forward this article everyone you care about.

Has heat therapy (Cozy Therapy) helped you stay healthy? Engage your Tribe, share your questions, thoughts and ideas in the comment section below!