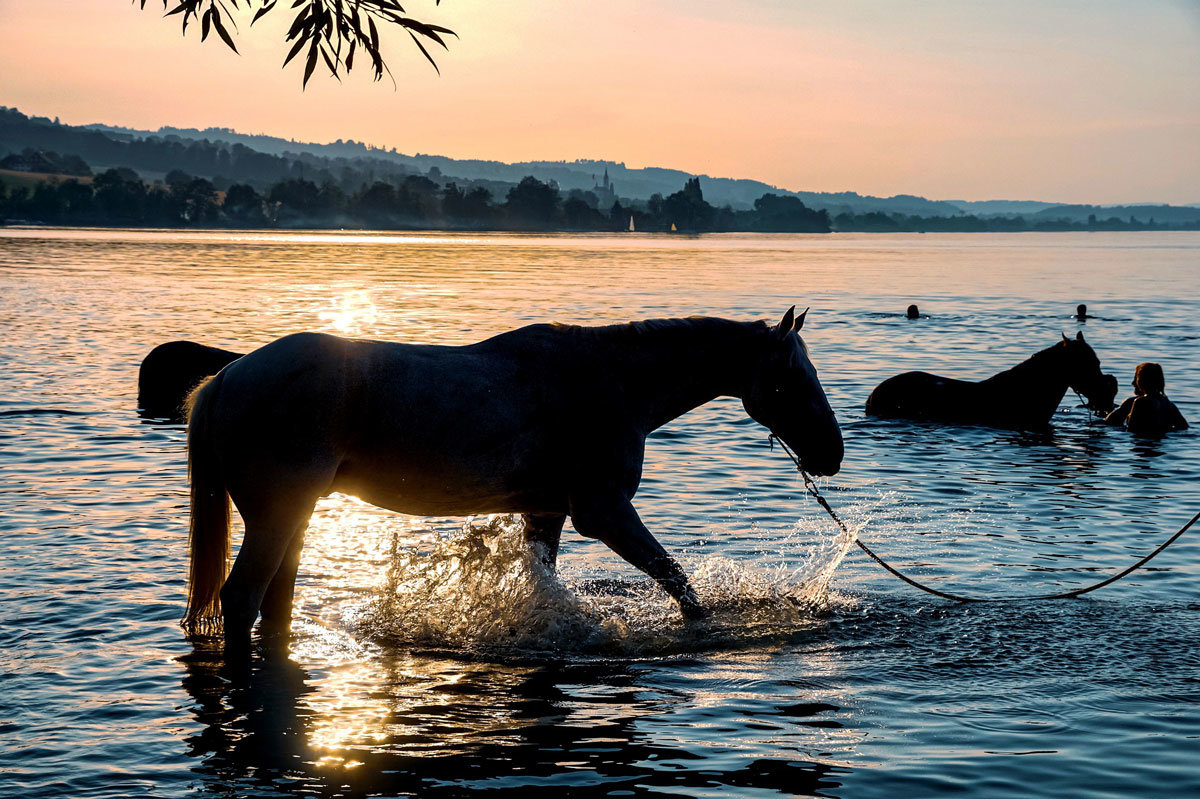 When Lisa Yarchar’s Thoroughbred horse sustained a fracture of the tibial crest with open wounds to the joint, she was told by several vets that he would never be sound enough to ride except on trail rides and only at a walk. After trying all kinds of treatments from different methods over eight months, three sets of X-rays showed there was no apparent change.

“We began to use Equitonic sound therapy every other day for thirty minutes,” she later said. “I held the device directly over the fracture. After a month, we had him X-rayed again; this time it showed a significant change to the bone and surrounding tissue. Our veterinarian commented, ‘I don’t know what you are doing but keep it up and don’t stop.’ The fracture has healed and most of the arthritis has diminished. You should see him run and buck and play; he never takes a sore step now!”

To understand why Equitonic sound therapy was so effective at treating Lisa’s horse, it helps to first know a little about an important building block of the body called hyaluronic acid, part of a group of compounds called glycosaminoglycans. Found highly concentrated in the skin, corneas, cartilage, and synovial fluids, our bodies naturally produce this viscous fluid to lubricate our joints, hold the structure of our extracellular matrix, and heal wounds.

Young horses have a lot of hyaluronic acid, attributing to their flexibility, resilience, and rapid healing of wounds. But as horses undergo chronic stress in the form of constant pounding of their hooves or any other form of sustained trauma, whether mechanical, chemical, or even emotional, their bodies start producing inflammatory chemicals which break down this precious compound. Since hyaluronic acid is the main ingredient in the synovial fluid that lubricates joints, this results in “dry hocks” or joints that are poorly lubricated.

Hype started forming around hyaluronic acid in the early 1970’s when “black market” hyaluronic acid started showing up on racetracks, first in the Standardbred world, then among Thoroughbreds. It was clear that injecting it directly into the joints could prevent injuries and increase recovery among those horses who had been injured. Widespread interest in the chemical still exists today, and for good reason: hyaluronic acid provides substantial improvement in muscle and joint health—enough to make the difference between first and last place in many close races, and enough to form the difference between a high quality of life for a horse and a poor quality of life.

The cost of high quality hyaluronic acid is about $500 per 1,000 mg in injectable form and about $120 per 1,000 mg in pill form. So, it is possible to increase horse health through veterinary injection or supplementation, but it can be costly. Most horse owners don’t realize there is a therapy that naturally restores hyaluronic acid production so horses can produce thousands of dollars’ worth of their own hyaluronic acid every day. It is known as Equitonic sound therapy, and the Equitonic 9 is its current evolution. 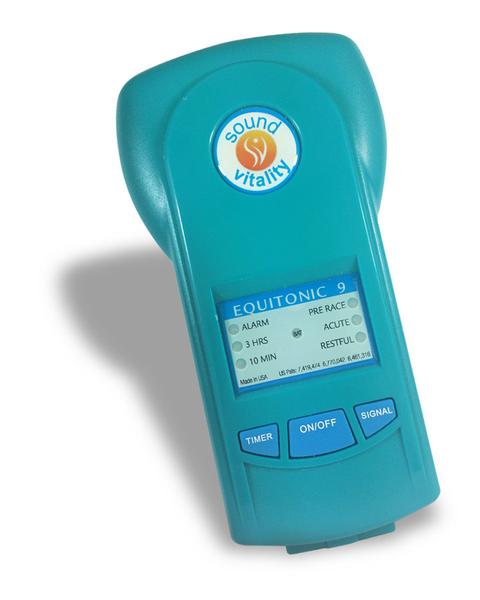 Patented by mechanical engineer and scientist Richard Lee, the Equitonic 9 is a handheld, rechargeable, battery-operated device that uses alpha-range sound waves to simultaneously relax the body, reduce cellular trauma, and stimulate the production of hyaluronic acid. Sound waves (below the range of human hearing) are emitted from the device, called the transducer, in an unpredictable pattern. This irregular pattern is the key to the effectiveness of the healing sound waves because the horse’s body cannot adapt to it.

The sound waves break the habitual pattern of stress, allowing the cells to regroup and realign themselves within healthier parameters. Because the sound waves are not predictable, the cells remain in a sort of “plastic state” where they can begin to rebuild themselves—creating stronger cell membranes, increasing the production of hyaluronic acid, and ceasing to send alarm signals to the rest of the body. Pain and inflammation are reduced and relief arrives.

But is there proof?

In 2001, inventor Richard Lee collaborated with veterinarian Ronald J. Riegel in a series of scientifically controlled studies focused on understanding and quantifying the healing effects of the Equitonic device. Using groups of ten genetically similar, Standard bred racehorses (all eating the same diet and participating in the same daily workout schedule), research protocols were devised to study the effects of one twenty-minute Equitonic session on the inflamed hocks of the horses.

Infrared thermographic imaging soon determined that the hocks treated with the Equitonic dropped three degrees Celsius or more after just one session and stayed down for hours. Repeated treatments, over a period of weeks, showed progressively more effective reduction in inflammation, indicating that Equitonic therapy is cumulative, with two or more treatments providing substantially deeper and longer-lasting relief than a single treatment.

In a second, even more rigorous field trial, blood analysis of all ten horses in the treated group revealed that Equitonic therapy brought about a significant drop in levels of both AST (Aspartate Amino Transferase) and CPK (Creatine Phosphokinase)—both of which are prime indicators of inflammation in muscle tissue. Additionally, the treated horses showed significant improvement in the rate of recovery after races, attitude, and performance, shaving 1.65 seconds off their time over six weeks—enough to make the difference between first and last place in many close races.

Interested in identifying the biochemical mechanism by which the different measurables could be explained, Lee and Riegel expanded their research into the study of hyaluronic acid. Together, Lee and Riegel developed a protocol to measure hyaluronic concentration in the horses’ hocks after Equitonic therapy. Five weeks later, they had the results: hocks treated with the Equitonic had 33% more hyaluronic acid than untreated hocks.

Meanwhile, the untreated control group showed a marked decline in hyaluronic acid.  Even better news: the quantity of synovial fluid in the treated horses had increased dramatically, resulting in a fully lubricated joint, and inflammation had all but disappeared in all the treated horses.

The results of the studies confirmed what Equitonic users already knew: using the device on horses relieved pain and inflammation and accelerated recovery. The second conclusion, that the Equitonic dramatically increased hyaluronic acid, helps explain why this sound healing device actually works.

Equitonic sound healing devices have been used for three decades to reduce inflammation and pain, treat injuries, accelerate post-surgery healing, and promote a sense of relaxation, peace, and wellbeing in horses… and, for the record, in humans, too. Help for horses who suffer discomfort and pain, which perhaps previously felt out of reach, is at our fingertips in the form of a handheld transducer and its healing, cutting-edge, sound wave technology. Relief is minutes away with the Equitonic 9.