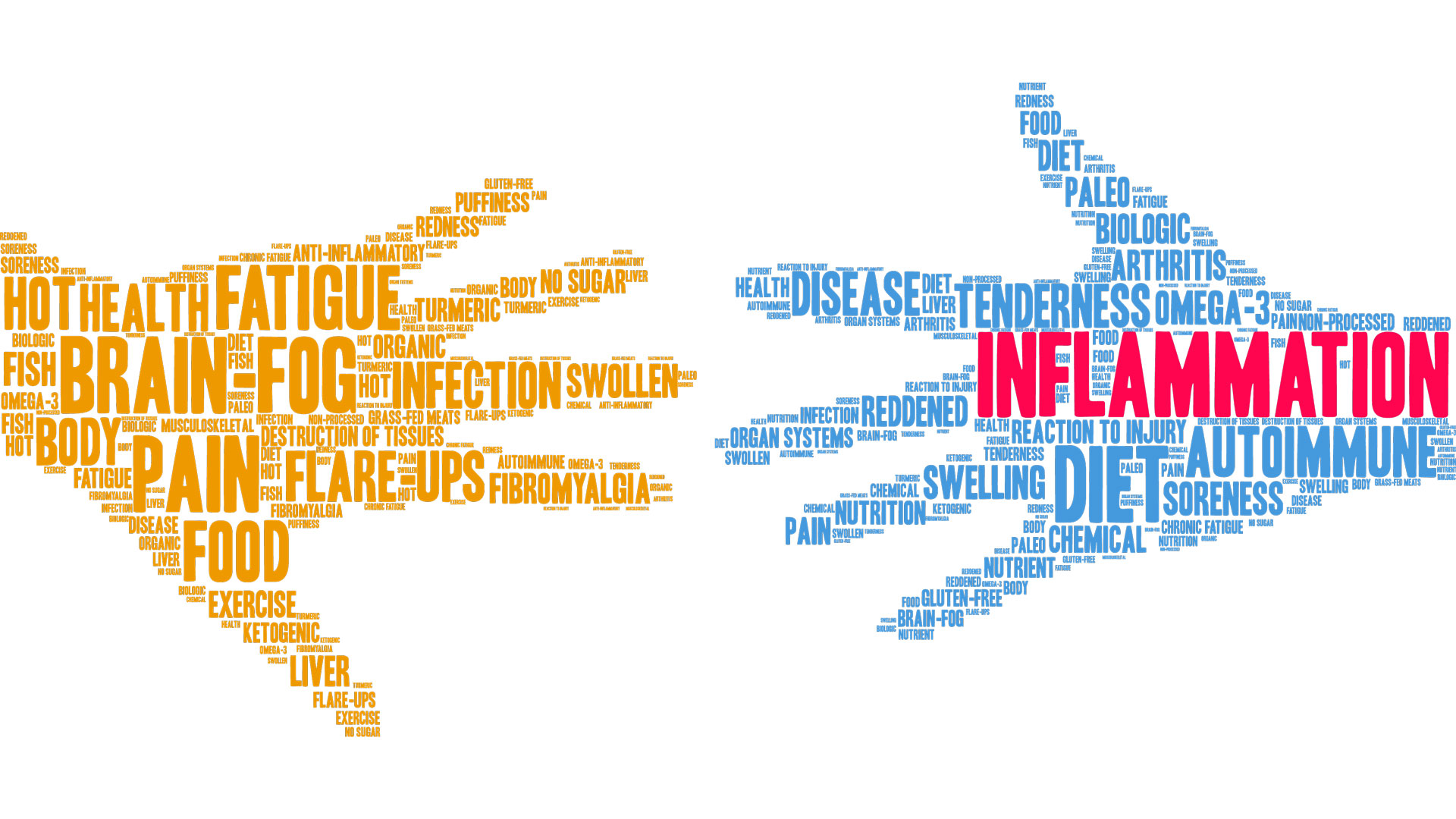 When it comes to natural pain relief from chronic joint pain and muscle pain, animal research studies are the gold standard for efficacy because, unlike humans, animals don’t have preconceived notions on healing. Animal studies also provide more dependable research because people vary so much in diet, lifestyle and genetic makeup and condition. The research studies reported here were conducted in 2000 with genetically similar standard-bred horses being fed the same diet and undergoing the same training programs on a regular workout schedule training for races (daily training and weekly racing).

The horses developed inflammation (heat and swelling) in their hocks (ankles) from the regular pounding and shock. Inflammation from repeated pounding is an excellent example of how mechanical shock can induce residual cellular trauma, abnormal responses and pain. Take a look at three of our controlled studies on horses.

The following research investigations in horses show that Infratonic Therapy reduces inflammation as indicated by Infrared Thermography [equine paper 2a]. On ten horses, one hock was treated while the other hock served as a control. After 30 minutes, the treated hocks dropped more than 3°C. This photo shows a typical result, with the treated hock on the left. The red shows abnormal inflammation. This result indicates that Infratonic Therapy substantially reduced inflammation.

The following graph summarizes the results of three studies conducted a week apart, showing progressively more effective reduction in inflammation, which indicates that repeated treatments over days or weeks offer a cumulative effectiveness far greater than individual treatments alone. Note that a second 20-minute treatment (green bars), 12 hours after the first treatment, provided profoundly deeper and longer lasting relief in inflammation. Even after 100 hours the treated hocks remained substantially cooler than the control hocks. This is a dramatic demonstration of the effectiveness of the Infratonic to reduce joint inflammation, indicating that Infratonic Therapy is cumulative, with two or more treatments providing substantially more benefit than a single treatment [2a]. 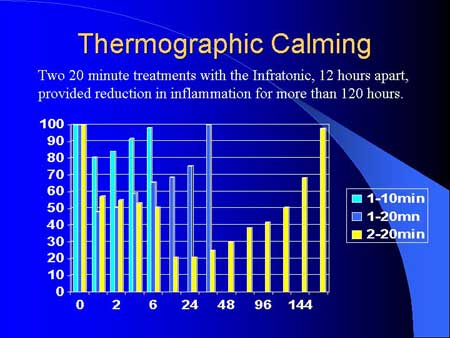 Success in the infrared thermography research left the question of mechanism. This led to additional controlled research with two groups of 10 race-horses. These studies tested healing of muscle damage by monitoring enzyme levels in the blood. CPK and AST are two diagnostic muscle enzymes that are elevated in tissue that has been injured or subjected to trauma. When these cells get damaged or the cell membrane becomes weak, CPK and AST leaks into the blood stream indicating muscle damage.

Ten horses were treated with the Infratonic and ten served as the control group, receiving no treatment. Results in the treated group showed a significant drop in the serum level of CPK and AST, which indicate accelerated muscle healing. The treated group showed a steady and marked improvement in the reduction of pain, reduction of inflammation and accelerated healing while the control group’s health declined in those same categories over the 6 of the weeks.


These graphs show that the ten treated horses improved to normal in serum CPK and AST levels during the study while the control group worsened. This controlled study shows the cell membrane in muscles of the 10 horses treated with Infratonic Therapy became stronger, decreasing CPK and AST leakage. This results were supported with the findings that the treated horses showed reduced muscle swelling after workouts, remained healthy through heavy workouts, and ran faster times, while several in the control group became injured.

What we learned: Constant pounding, or any kind of abuse– be it mechanical, electrical, chemical or emotional– can cause cellular trauma. This stalls healing and cells start producing inflammatory chemicals which in turn, cause pain or other abnormal activity, which further interferes with the healing process and increases pain.

To explore the mechanism behind the remarkable healing of muscles of race horses, another hypothesis was developed, that trauma in cellular tissue causes abnormal secretions, such as inflammatory chemicals, and impedes production of normal secretions. The hypothesis was that constant pounding traumatizes the cells in the synovial lining, which, instead of producing healthy synovial fluid rich in hyaluronic acid, produces inflammatory chemicals that break down Hyaluronic Acid, resulting in “dry hocks”– joints that are poorly lubricated. It was further hypothesized that Infratonic Therapy would remove this trauma, restoring normal production of HA compared to the control group. [2b]

This hypothesis was tested in the year 2000 by measuring the synovial fluid in the hocks of ten standard-bred horses treated with the Infratonic. The horses were treated on one hock, and the other hock remained untreated, serving as a control. The results showed that production of Hyaluronic Acid (HA) increased with Infratonic Therapy. While the HA concentration continued to decline in untreated hocks, it increased steadily in the hocks treated with the Infratonic.

Infratonic Reduces Cellular Trauma
This is precisely what was found. Not only did investigators see a 41% net increase in HA (see graph below), but also an increase in volume, viscosity, and clarity of synovial fluid. This is compelling evidence that Infratonic Therapy normalizes cellular activity in traumatized cells, discontinuing production of inflammatory chemicals and increasing production of needed healing chemicals, such as Hyaluronic Acid.

Infratonic Therapy Increases Hyaluronic Acid (HA) Production
Another mechanism that emerges from the HA study is that a fundamental mechanism of Infratonic Therapy is that it may increase hyaluronic acid production throughout the body, just as was observed in the synovial tissue. HA is not just a lubricant, but rather, is a fundamental substance in the extracellular fluid that is capable of holding ionic compounds firmly in place or allowing them to pass freely, depending on how tightly it is coiled. It is known to be a fundamental ingredient in supple skin, healthy eyes, and healing of bone, muscle, and cartilage.

Further, if it is the additional HA that causes the horses’ muscles to heal, it appears likely that HA plays a major role in a wide variety of body functions such as cell wall coherence, influencing not only muscle strength, but also things like congestive heart failure and edema where fluid escapes from the cell wall into the intercellular space. It may also influence the sodium potassium pump that maintains necessary electrical potential in every cell. Further, it may affect the structure of meridians, the electrically conducting pathways in the body associated with acupuncture and acupressure.

Injections of HA into the hocks of horses have been common therapy for sore and inflamed joints for decades, and in recent years, have been used by doctors for pain relief in human patients. They use either animal derived HA or synthetic substitutes for arthritis and degenerative joint conditions, for several hundred dollars per injection.

Performance Improvements in Race Horses While it is impressive that horses in the muscle-healing study showed increased training speeds by six lengths, it is important to know whether there were actual performance improvements in races. Horses across the country using Infratonic therapy have been making stunning recoveries from injury and winning races.

Monarchos wins the 2001 Kentucky Derby, in the second fastest time ever. His trainers used Infratonic Therapy daily before the race.